Put Some Water On IT

One thing that has to be consistent for all Peace Corps volunteers, despite country or sector of service, is that we get pretty dang creative with the limited resources “we are having.” (inside joke for my fellow volunteers in Namibia) The movie Friday always comes to mind when I think about this. The scene I think of, and sorry if I don’t get it exactly correct, is when Ice Cube’s character (Craig, I think) pours cereal into a large bowl and then goes to the fridge to get some milk. To Craig’s dismay there is no milk in the fridge and he goes to the trash to dump the cereal. Just before he dumps the contents out of the bowl his dad walks into the kitchen and the following exchange ensues.

“You better put some water on that damn shit!”

I love that line. Seriously though, it ain’t cool to throw away cereal because you didn’t realize there was no milk in the fridge. When I first watched that scene years and years ago I just thought it was funny. Now, when I think of putting water on that damn shit I think of being resourceful. Of using my imagination to solve problems in a creative way. Sure cereal is better with milk, but it is just fine with water. If for some, no cereal at all is better than cereal with water, then those people will learn to check for the milk before they fill up their bowl. This simple quip was a great fatherly lesson. Craig committed to eating that cereal when he dumped it into the bowl, and his father wittingly said you better honor that commitment, and it’s your own damn fault if you didn’t make sure there was milk first. And that is honestly what I am starting to think the Peace Corps is all about. Stay with me, haha.

Take these movie nights I am putting on for the community as an example. We held our second movie night in a large dining hall rather than outside like we did on the first night. As a result, I had to hang the screen (white bed sheet) in a different location, and I didn’t have enough rope to secure all four corners of the sheet in order to have a taut, flat screen. This was a problem, but I didn’t just say sorry to two hundred learners and that it wasn’t going to work out. No, I used my flannel and a strap from someone’s bag to secure the fourth corner to a heavy cafeteria table. In other words, “I put some water on that damn shit!” 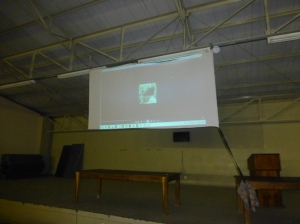 There are many ways myself and other volunteers do this almost daily. I have hung a mosquito net with a neck tie and a sleeping mask – that I got in a goodie bag during the flight to Namibia. I don’t have an oven, so I bake bread in a pot. Skillet cookies are bangin’. Setting my dumb phone on the window ledge, in a tupperware container, with the headphones dangling outside, and the phone speaker turned on is a great way to listen to a local radio station. A coat hanger or a leatherman is a perfectly acceptable replacement for tongs to flip meat at a braai (barbecue). Four guys in a small car can sufficiently lift the front end of the aforementioned car in order to slide a stump under the frame to change a blown out tire because the owner of the car doesn’t also own a jack.

Problem: Power goes out; therefore shutting off the water and the cellphone network.                                            Solution: Cook over a fire and have some canned meat around that I am pretty sure is cat food. Always have dry beans and maize meal in the house. Read books and write by candle light; it is pretty romantic. Depend on locals to take care of and feed the helpless white American, AKA me.

I think maybe you are getting the point, which is that at any given moment there is a Peace Corps volunteer making do with what they have, which is what most Americans would call nothing. They are teaching math or English by writing equations or words in the sand, building a drip irrigation system in their gardens with plastic bottles, banding markers together to give condom demonstrations, dehydrating fruit in cardboard boxes, and who knows what else to carve out some sort of meaningful service in their new environments. And although it can be pretty dang frustrating, it is also pretty dang cool. To other volunteers and others in general, If you have a challenge in your life or some barrier that is preventing you from getting to where you want to go, then might I recommend you take the advice of a fictional dad from Compton and “put some water on that damn shit!”

As always, thanks for reading.

(Volunteers- I would love to hear examples of how you made do with very little to get something big, or small, accomplished.)

One response to “Put Some Water On IT”